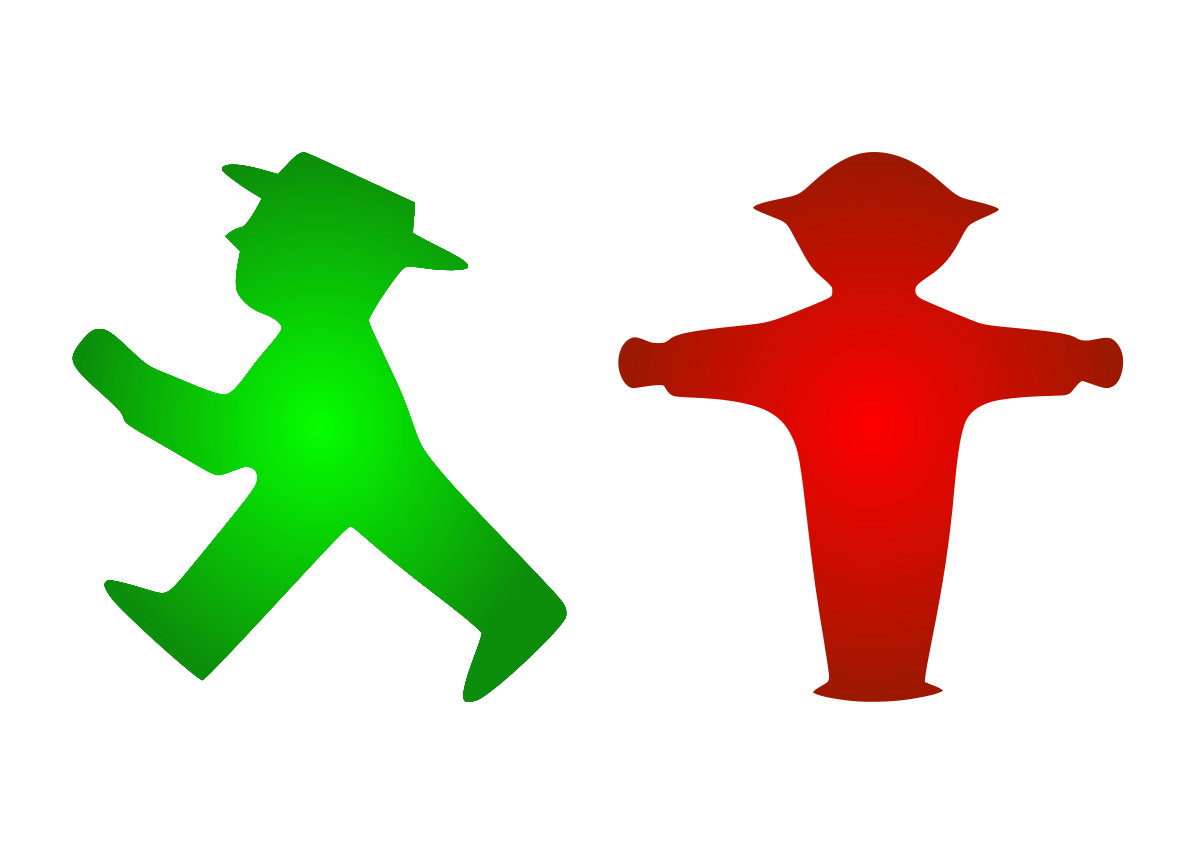 After day 3 was cut short due to feet, it was hardly in doubt that day 4 would be any different. We slept in late and once up and dressed, we packed the remains of our stuff and checked out. The hotel has a place we could stash our luggage until it was time to go to the airport, and so…

We went down the road about half a mile to where there was an exhibition on the Story of Berlin. A historic walk through the town from the middle ages up until the wall came down. It was rather interesting in it’s way, though small, and with far too many stairs for my taste. One nice exhibit was a room split down the middle with one side decorated as West Berlin and the Other as East – with a huge “bomb” hanging from the ceiling between the halves.

with on old East Berlin street crossing sign, which is it’s own peculiar thing different from what we get back home, or even in the less hipster parts of West Berlin. She got the green “cross” symbol, rather than the red “stop”. I commented on the fact that they look like lemmings from the game of that name. I dunno, I have that sense of humour – if it can even be called that. Anyway, from there we decided we were hungry and thirsty and went off to deal with that.

Having been duly fed and watered, we retrieved our cases and headed for Zoo Station to get the express to the airport. We spent some time finding a ticket machine that worked properly, and then (because the lifts were out) struggled up a couple of flights of stairs to await the train. The express, as it’s called, was about the speed of an old struggling loco back home, and seemed to stop everywhere en route – or so it felt at least. There were a lot of stops missed out too, otherwise it’d have been hours.

At the airport, there was a lot of queuing, followed by baggage check, then more queuing for the cabin luggage security check. Following this was another long queue for the passport check and then we could finally walt about 14 miles to queue for the boarding pass check. After this we had to wait, standing in a hot room for about 3 months for boarding to start. My feet died first, then my legs… I was close to passing out before I was finally allowed to sit – and then only because we were about to board and people started to stand up.

Luckily the plane was only a few miles from the departure gate, so we managed to board without too much hardship, and could finally relax.

At Luton, after a smooth ride where the skies changed from blue to grey, there was more standing about while the baggage handlers came back from their own holidays and finally managed to unload the plane. from there, was a short walk of only a few more miles to the car park. Fortunately these lifts worked… and we were on our way home.

On the M1 we broke down! The car was fine, but with the news on the radio, the crap weather and knowing we were back in the place that demons from Hell use to threaten their children was just too much for the human component. Still, it could have been worse… probably.

And that was it. Farewell Berlin until next time. We will be back. The Berliners were nice, friendly and carefree for the most part. Their driving left a lot to be desired, and I’m not sure Currywurst counts as actual food, but then again considering what street food is like over here, it’s hard to complain.