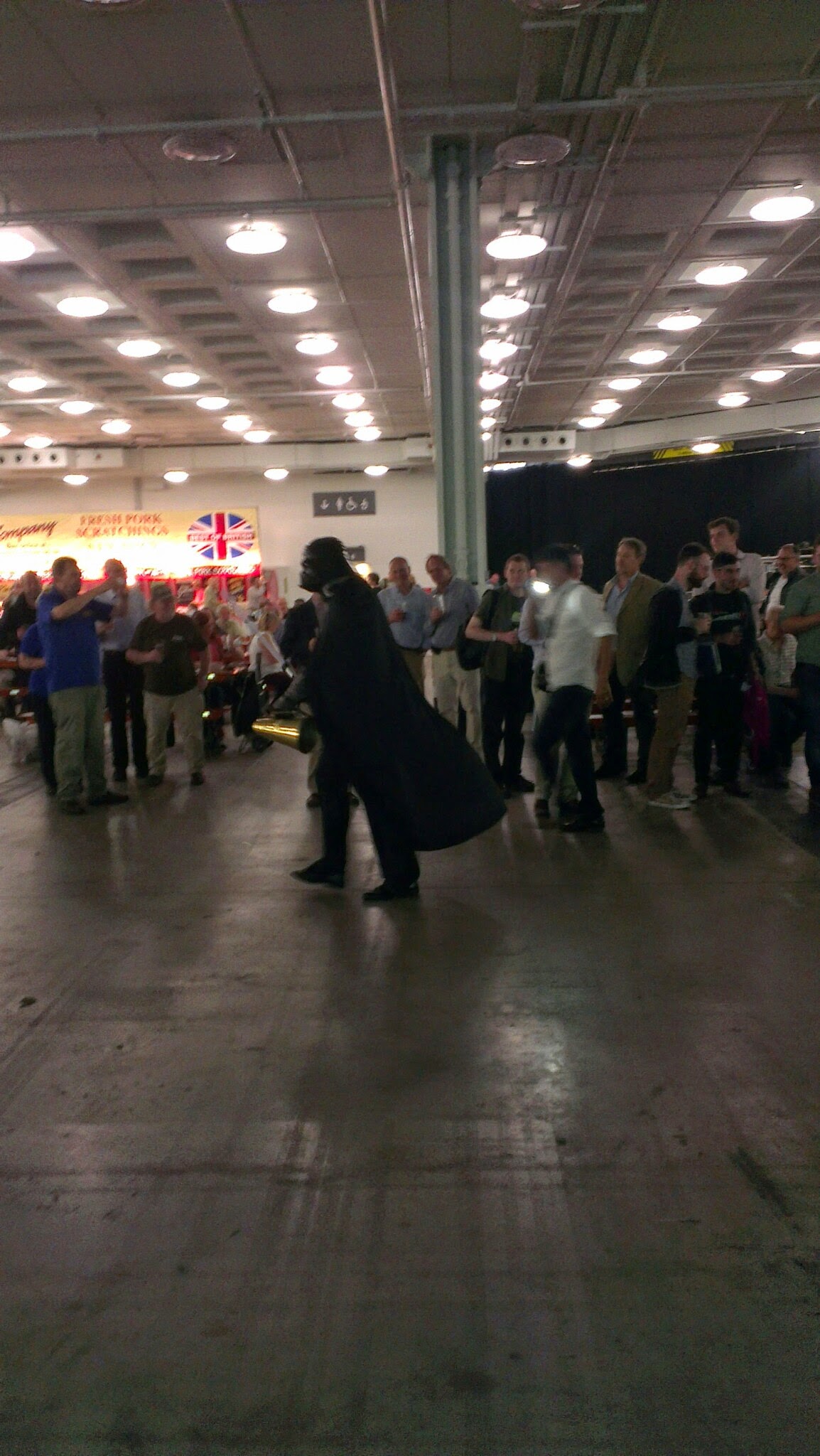 Today marks the start of this year’s Great British Beer Festival (GBBF) at London Olympia, and for reasons I’ll let you work out for yourselves, I am there sampling a few choice brews from around the UK and it’s neighbour, the Rest of The World™.

I decided to stick to a half pint glass today, since I’m only here for a few and am not interested in getting drunk, and so started as I meant to go on with a glass of De Molen Citra BA from the Netherlands. At about 4.6% it was quite a tasty start to the session, and was accompanied by a Wild Boar burger from one of the food stalls; there being a large selection including ostrich, kangaroo and venison.

Moving swiftly on, my second was an Andechser Spezial Hell, from, well Germany. Slightly less strong, this is always one of my favourites, especially if I can get it on draft, rather than bottled.

At some point around here, the marching band of the Imperial army came by and stopped not 20 feet from where I was stood to play a few rousing numbers, including “That Old Time Religion“. I’m sure I heard Lord Vader shout out “Jedi” between choruses.

Next I took a wander round and picked up a bottle of mead to take home, and drifted round the bars on the way back to base camp. On the way I picked up a glass of Hog’s Back T.E.A., or as I requested, a cup o’ tea. I was offered milk and sugar, but neither showed up in the end, which was a pity. Oh well, I had it as it came and it was ok, though the water could have been hotter.  A good old local standby which again, I usually see in bottles.

Beer number four was a glass of Rhymney Dark, from Wales. It’s something I used to have a lot when I lived there, but have missed for the last few years. It’s smokier than I remember, but tasty nevertheless. Again, at about 4%, this brings me to two pints.

I made the last one last a while, and so decided that I deserved a treat, and so, to the haunting strains of the Chaminade String Quartet, I brought back a third of Van Honsebrouck Kasteelbier, which at 8.5% warranted some measure of respect, hence the third of a pint instead of my usual half. A good thing too, as this beer could trip up the unwary. And so, a strong beer, with fabulous music sets the scene for whatever comes along next.

While drinking this beer, the quartet finished and the auction began. Much too noisy for me. Anyway, Sean gave me a pour-off off something strong™, which was smokey. I needed a rinse after that and so I requested such with my next beer, an Opat Chocolate. I got the beer, but not the glass rinse… Bad CAMRA, train your staff! Still, the beer both smells and tastes awesome! I may have another of these when the Loufing is with me so that she can taste it. I’m unsure, but I think she might like it. As they also do a cranberry version, this could mean a few more trips to this bar.

The last beer for tonight is another Opat, this time the Cranberry. It’s nice but the chocolate is better. I think that I won’t have another of them myself. It’s not even slightly a bad beer. It’s just rather bland. Still, a pleasant end to the evening, but the conversation is starting to go places I’m not comfortable with, and I think it’s about time to leave. I’m already an hour later than planned.